How to do the Embroidery in the words of a Newbie: Part II


In this installment, I'm going to touch on two things that I learned how to do better as I went along.


This technique I had the humility to learn from a friend, who found a helpful link on the internet.  I couldn't tell you where now, though.


Most of the designs are thin enough that a full stitch across is narrow enough to hold its own.  However, I found that there were a couple of petals here and there that were simply too wide for tidy stitches without a little bit of help. 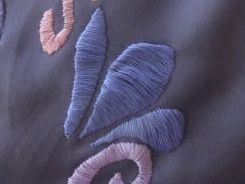 Exhibit A: Notice how the stitches in the center petal are loose and puckering because they're wide enough to have a lot of their own wiggle room. 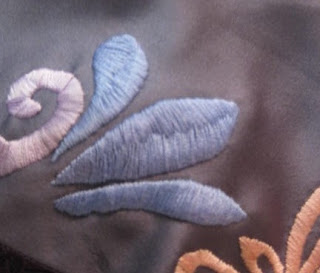 Exhibit B: When I did the same petal on the opposite side of the skirt, I overlapped stitches into the middle so that they lay more nicely.  It creates a sort of "seam" in the middle, but I staggered it to make it less noticeable, and you really can't tell from a distance or at a glance.
2. Turning a corner.


This technique is my own.  That is to say, I figured it out on my own, but it's probably some time-honored trick of the needlework trade that I could have also had the good sense to just read about on the internet.


There are a lot of curlycues in these designs, which means there's a lot of going around a curve.  Unfortunately the laws of geometry obviously mean that the inner curve has a much shorter distance than the outer curve, and trying to follow the design purely from edge to edge you end up with a lot of crowding on the inner curve.  In my efforts to do so, I ended up wasting a lot of thread, and it didn't really look that great, either.


Many curlycues later, I stumbled upon a method of compensating that was tidy and elegant enough for my liking.

NOTE: All the stitches in the photographs below are going bottom to top. 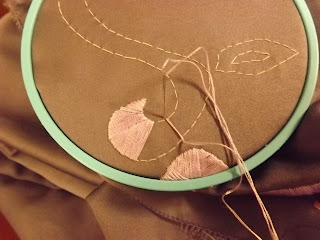 Exhibit A: When you reach about the halfway point of the curve, jump ahead and angle an outlying stitch the way the "end" of the curve would be. 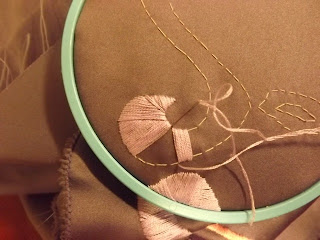 Exhibit B: Mirror the outer stitch with succeeding stitches back in toward the curve, until the two groups connect on the inner curve (the point where the needle is sticking above). 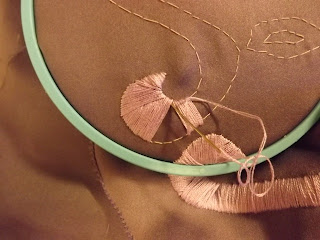 Exhibit C: Still paralleling with the "outer" stitch in Exhibit A, tuck the next stitch under the threads of the first group of stitching so that the end of it is hidden underneath. 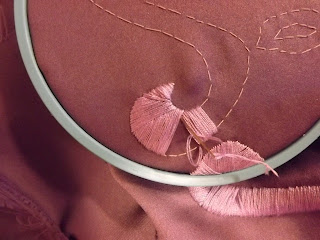 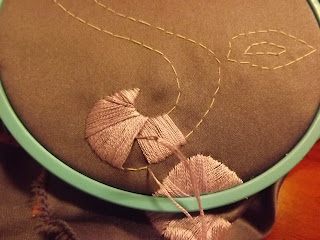 Exhibits D and E: Keep repeating this process, still in parallel with the "outer" stitch. 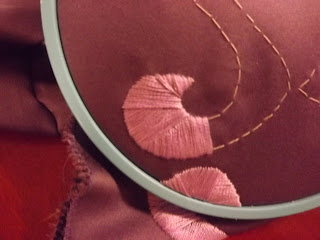 Exhibit F: Until the curve is completely filled in!
As you can see in the pictures, the result of this technique leaves a kind of overlap effect which someone else might not like, but I didn't mind in the slightest.  I actually think it looks kind of neat.  Or that could be me being pleased at my own cleverness, I don't know.  In any case, much like the staggering of stitches to fill a wide gap (described above), you can't really notice it from far away.
And that concludes my general adventures and advice about embroidery! For now, anyway.  I still have to do the hem, but I probably won't start working on that until next spring.
Behold the results! 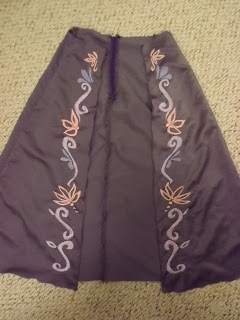