It's been quite a month, let me tell you.  What with Dragon*Con (more on that later) and recovery and working hard to meet a writing deadline (more on that later), blogging has fallen by the wayside.  As do most of my hobbies, in their time.  But I'm going to try to catch this one up at least to "where we are now" I have four to six more blog post plans that will bring us up to date with the Rapunzel costume, which is almost officially complete, and will be on hiatus for a few months.  This time on purpose.

So, without further ado....

How I Did the False Panels


As you can see in the photo below, Rapunzel is actually wearing a two-piece top, the undershirt and the corset part overtop.  I've talked about it before.

(I didn't want to do that much work) 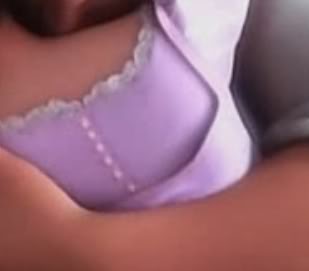 Ergo... once the corset was complete, I took some wax paper and drew two more-or-less equally sized squares, like so: 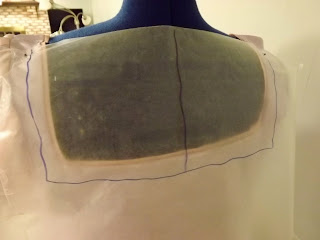 Having confirmed that the squares were sufficiently wide to "double up" across the back, I really only needed one of them to keep going.  I cut it out four times. 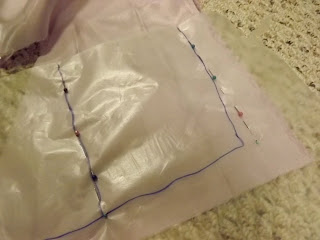 I made two little pockets, pillow case style, making sure to add the lace trim to the edge that would be the top.  Observe the beautifully clipped seams below!! 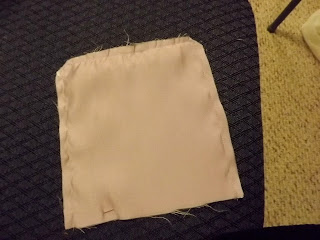 I turned my mini pillowcases inside out.  I did NOT stuff them with pillow fluff.  Instead, I sewed the one square over the other using *gasp* the perfect little pink buttons I found at the fabric store (one small thing that proved super easy to find).  I hand-stitched the outer and lower edges of the panel to the inside lining of the bustier and voila!!! 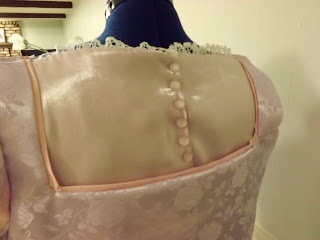 Alas, I was on a time crunch the morning I cut out the front center modesty panel, so I didn't take pictures.  But all I did was:

(2) Measured the correct distance to set them apart from edge to edge (then added a seam allowance).

(3) Cut them out into a single piece, two times.

(4) Combined them (again, pillowcase style, and again putting the lace edging on the top, in this case on the sweetheart curve

(5) Hand-stitched the left side of the modesty panel into the inner left lining of the bustier (my left).  Put snaps on the other end to get in and out of it.

The panels done this way were pretty easy.  I had fun doing them, because they were a huge part of getting the costume finished, but they didn't take a long time.  :-)

Until next time!! (which should be in the next couple of days)
Posted by Faith King at 7:53 PM