*ahem* Still catching up with life.

So anyway, continuing our story.  The last two weeks before Dragon*Con were frantic.  I did a week's worth of embroidery, some touch-ups, and last, but not least, cut out and installed the final panel on the skirt.

When all of that was done, this is what it looked like: 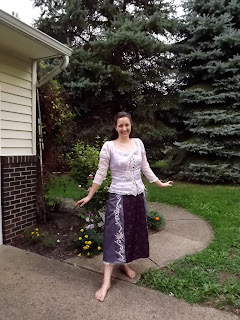 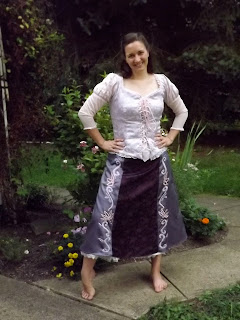 Ta-da!!! I was pretty darn excited, as you can imagine.

And let's not forget some of the important details: ... such as the back panel with the cute little buttons... 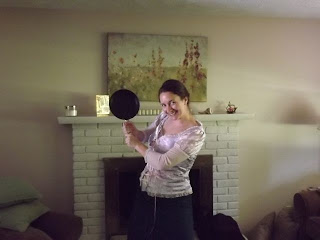 .
.. the frying pan...
and... oh!
I can't believe it, but somehow I forgot to post a blog about the most important accessory of all!! 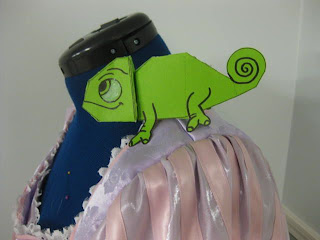 In any case, with the exception of an upgrade on the frying pan, the costume and pieces as you see them in these photos are how I wore them to Dragon*Con.

But it's not quite ready yet. I still need to:

"What? You may ask.  Replace the center panel? Why?"

Because it's the wrong dang color, that's why.  Darn you, teeny tiny swatches that don't actually give a proper idea of color coordination whatsoever!!

Astute student's of Rapunzel's costumes will note that the "smooth" part of her skirt and the center, brocade part are more or less the same color, just one is textured and one is not.  (Astute students will also note that her skirt is more of an orchid color than either of the colors I show in the skirt above, but that's beside the point).  The plum brocade that I purchased was waaaaay, waay too dark.  Even my mom commented on it, and she has better priorities in her life than obsessing over costume replication.

I found myself at a crossroads.  Do I suck it up and live with it? Or have I already invested so much time and resources into this costume that spending just a little bit more money to get it As Right As Possible would be worth it for my own peace of mind?

The answer to that last question is yes, of course it would.

I made this determination ten days before Dragon*Con and went to the website and ordered the "purple" fabric instead of the plum (remember the part where I had to order 10 yards minimum? Yup, that still applies).  I even applied for three days shipping to ensure its arrival in time for me to fix the skirt before the convention.  Alas, it never arrived.

Finally, last Monday I called the company and confirmed my suspicions-- that my order had somehow gotten lost in the ether of cyberspace.  I placed it over the phone and just today got the shipping confirmation.  We are one giant bolt of brocade away from an Even Better Costume.

Oh, the things we do for art.