After one whole weekend, I've made excellent headway on the Princess Daisy project. What a great feeling it is to just buy the stuff and get going! (by which I mean, no endless test garments, alteration experiments, or research on embroidery. Ha!)

I'll be doing a full start-to-finish post later on about my notes and slight tweaks to the dress pattern for any enterprising Moms/Grandmas/CoolAunts who are trolling the internet for Princess Daisy tips (or, to not stereotype genders, any male sewing types with similar interest).

For now though, I will satisfy my readers with a progress-to-date photograph... 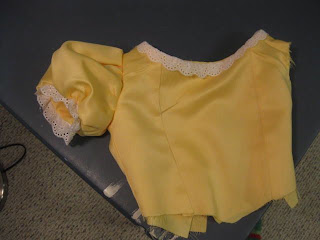 OMGosh LOOK IT'S SO CUTE!!!!!
...and a couple lessons I learned about understitching and seam clipping.

For whatever reason, I had it in my head that "understitching" meant the final bit of stitch you sew by hand to finish off a lined garment, or any project you have to turn inside out (i.e a pillow). I thought I was going to have to do this with Rapunzel, but it turns out I could turn the bodice on the armholes before attaching the sleeve, so it never became an issue.

While researching the elusive technique, however, I finally figured out that my sewing dictionary was all out of whack. Understitching is something you do to a lining to prevent it from "rolling" up on a lined seam, such as neckline. For example, if the neckline seam in the photo above were properly understitched, you wouldn't be able to see the tiny line of yellow on the other side of the lace. It would be duly subdued to its proper place of being on the inside.

The neckline pictured above is not understiched. Why?

Because understitching should be done before seam-clipping. I'm a big fan of seam clipping, so I was a little impatient. Lesson learned.

While we're on the subject of seam clipping, though, here's the second lesson I learned. Eh... I should say, here's a lesson that was reinforced to me, because it's really kind of a gimme.

BE CAREFUL WHEN YOU'RE SEAM-CLIPPING AND DON'T CLIP TOO FAR!!!! 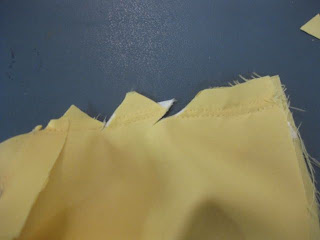 "Great, kid! Don't get cocky!!"
(I was kind of on a seam-clipping binge of glee at this point, and as you may note, I was almost finished!).

This is what it looks like on the other side: 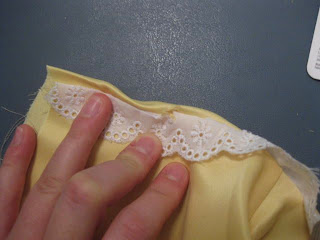 Since this is just a play dress and it's tiny and it's in the back, I'm going to just darn it together. Not too big of a crisis, but a small smudge on an otherwise very satisfactory day of work.

Another thing I've learned is that toddler-size sleeves are EXTRA HARD because you can't fit them around the skinny arm part of the sewing machine like you can grown-up sleeves. I'm not 100% satisfied with the distribution of the gather on that sleeve. It's kind of crowded to the front, even though I tried my best to get it even before stitching. I have a couple of ideas to get it better next time, mostly involving basting.

And that's it for now. I still have not used Sergio. A friend of mine who's a Super Sewer offered to give me some first-hand lessons, and I'm trying to arrange that to happen this weekend. If she doesn't respond, I'll probably experiment just enough on my own to finish off the in-seams of the skirt so I can keep going. In any case, I'll probably be sticking to the weekends for sewing. Between exercise and my writing/editing obligations (self-imposed), there aren't big enough blocks of time on weekdays.

Since the internet is all about cats, I'll close this post by pointing out that Lucy, as always, was very eager to help Mommy with her sewing. 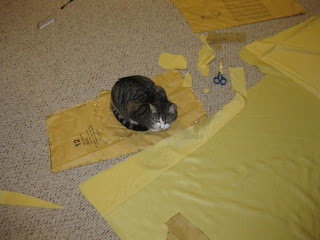