B is for 'Bodice' or 'Bustier'

Rapunzel's bodice. It is a thing of mystery and extreme detail. As a whole, it is my biggest challenge.
Here is the best picture available of the monstrosity from the front: 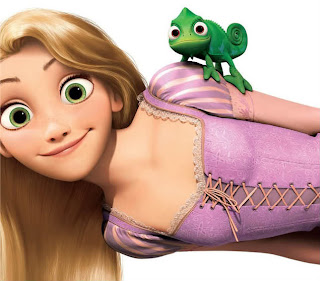 Having spent my fifth viewing of Tangled (what?) spending more time focused on this costume than on the story, I think I figured out exactly what is going on here. There are two pieces. The shirt underneath has the lace trim you see on her neckline. Although you can't see it in this picture, the undershirt also goes up much higher in the back than the jacket part, and it has little pink buttons near the top.
The jacket part has the sleeves attached and is made from lavender brocade.
Before I began this madness, I found this wonderful write-up of the costume including pattern suggestions, which is where I found myself at a loss. There are so many patterns out there, and my eyes were starting to cross from all of the searching. At the suggestion of the write-up, I bought the pattern 7982 Burda.
Important Lesson learned: Patterns that come from Europe are A WHOLE LOT MORE ANNOYING to follow than McCall's and Simplicity. I was grateful I had at least a modicum of pattern experience under my belt, or I probably would have been in tears by the end of the night when I first tore into this one.
Pattern-related escapades aside, at the end of the first night with 7982 Burda I had determined it wasn't 100% the pattern for me. Most of it was right but there was one small problem that was bothering me. The cup of the bust had a horizontal seam running down the middle that was in blatant contradiction with Rapunzel's gown. Observe the horizontaly-ness below and compare with the helpful image above: 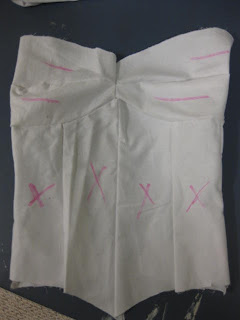 Now, I am willing to make certain concessions on the faithfulness of this costume, but that was one I just could not have lived with. So, I decided to make my funky European pattern even more funky by diving off the cliff of Alterations.
Because I am insane and I can never do anything the easy way.
Ergo, I combined the top bust of 7982 Burda with the bottom bust of 3827 Simplicity, a pattern I already had on hand, and which featured a dart-style curvature instead of the horizontal seam thing. This gave me the appropriate sweetheart neckline sans the horizontalyness.
I made a homemade pattern to accommodate this combination, as shown below: 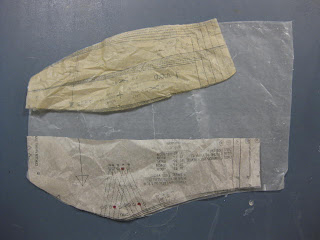 (I also added an extra inch to the length, because I am tall and everything that comes off the rack is too short and looks dumb on me. This is MY FAVORITE THING ABOUT SEWING. I can add an inch to the bust of ANYTHING and it WON'T RIDE UP ANYMORE!!! Hurray!!!)
For the record, this is not the only alteration necessary to make this bustier to my satisfaction. I also have to make it higher in the back, somehow draft the curvature for the armholes and attach sleeves, and leave the whole thing open in the front for the lacing. Surprisingly, that last bit adds an element of idiot-proof wiggle room to all of these alterations. Since I actually WANT a big gap front and center on this costume, I don't have to stress about the measurements so much.
And that's a good introduction of how I sew. I learn what I need to learn when I need to learn it. I don't always go for the easiest way. I like to try new things. Really, at the end of the day, pattern-altering is just geometry, after all. I have fun with it. :-)
Posted by Faith King at 1:30 AM