The three names above are the three main characters in the Korean TV drama "Boys Over Flowers" (also sometimes referred to as "Boys Before Flowers") based on a popular Japanese manga. It is available on Hulu, which is how I discovered it. In the past it has also been adapted for Japanese television, and I believe Taiwanese as well. 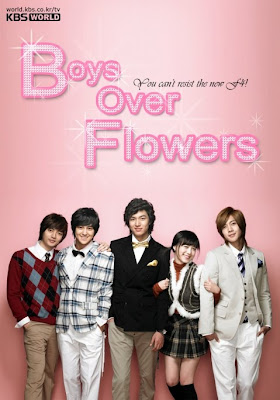 Link to show on Hulu (all episodes)

It is the reason I haven't made any substantial sewing progress for the past week. I liked the show so much on Hulu that I decided to go ahead and buy the Region 1 dvds. They came in last week and since that time, my mom and I have been devouring them. We've now watched 17 episodes out of 25.

"Boys Over Flowers" is a story that bears a lot in common with "Pride and Prejudice", combined with all of the lavish cliché and exaggerated drama of any good soap opera. I can't explain why, but I just love the stupid thing. The romance is so sweet and unrealistic that in a lot of ways, it's every bit as much a fairy tale as Rapunzel. With a Korean pop soundtrack.

In other news, I have been having drama of my own on the fabric front. I went to the website to order the brocade this weekend, only to find they'd completely overhauled their sales strategy which seemed to include not selling just the raw fabric anymore by the yard.

Since I didn't want to have to by a minimum five tablecloths in both colors, I called yesterday and asked if I could just buy the fabric I needed (in the amount I needed).

Then they left me a voicemail!! Uh-oh.

They took back half of the yes!!

(Translation: I could order the fabric straight-up, but I had to go with the minimum ten yards apiece as before. Which means after all that rigmarole I was right back where I started. Oh well. I'd already made peace with that particular annoyance).