H is for History

Rapunzel is not quite my first costume project. No, it all started last year when I finally had the financial means to haul out to California and see the fabled San Diego Comic Con with my own eyes. And no way was I going to be going just as myself. No, sir. Not when I've loved to dress up since childhood and found out there was more scope for such nerdiness than just Halloween.
SDCC passes have to be purchased well in advance. I believe my friend and I had ours by November of the prior year, so I had a lot of time to plan.
I started small. The thing I was most excited about at Comic Con was the panel for my favorite TV show Chuck (starring Tangled's own Zachary Levi), so I figured a Chuck-inspired costume would be a good place to start.
The Nerdherder 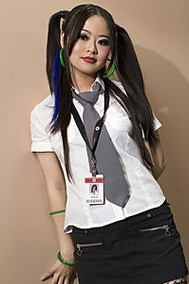 Super easy. You don't have to make anything, just buy (or print, in the case of the badge). I already had the skirt and some shoes. I bought a white top suitably cute to my tastes, a skinny gray tie in the exact right color, and the official NerdHerd lanyard from NBC.com.
(I was going for a generic NerdHerd, not any specific character such as Sarah or Anna-- pictured above.)
The finishing touches: An ID badge compiled and printed from a handy website, and talking my friend Tirzah into getting the Buy More polo to go as my "Morgan" I must say, we looked adorable: 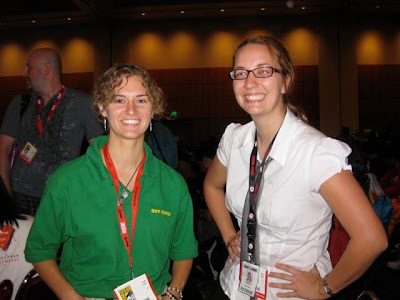 This was us at the Chuck panel itself, officially waiting for it to begin. The smile on my face is largely because of the fact that I had gotten a seat close to the microphone so I could be assured a spot in the queue for Q&A, but alas, the panel ran too long and nobody got to ask any questions. :-(
So the Nerdherder costume was a cinch. And I still had months of time to kill, and a rampant, ambitious imagination. My thoughts turned ahead....
After much consideration, I settled upon one of the beautiful costumes worn by the character Inara Serra from Firefly. Some of the fans call it the "Oatmeal and Orange" outfit:
Inara Serra 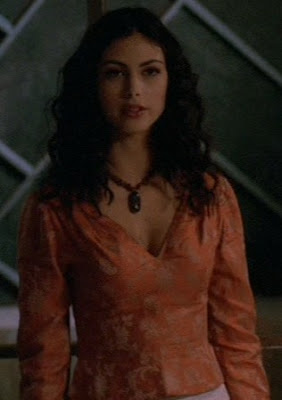 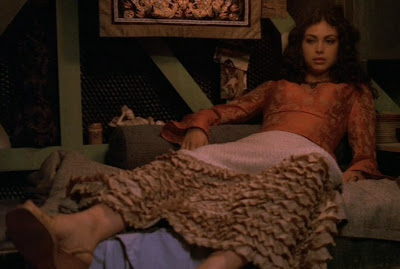 ("Arrrrrgh!! Look at all the ruffles!!!")
Yes, that was one of my thoughts too.
This costume taught me worlds of useful skills. Patterns, basic sleeves, how to line something, how to do alterations. It also established my habit of jumping right into sewing projects that involve strange or delicate fabrics. *foreheadsmack* My favorite story, though, is probably how I found the fabric for the skirt.
I found an interview with Firefly's costumer that said she actually used a waffle-patterned chenille that was supposed to be couch upholstery. I searched high and low (even went to a sewing convention up in Cleveland which turned out to be 98% for quilters and people who want to sew clothes scrounge around in the scraps back in the corner). But I couldn't ever quite find anything I liked well enough. I am, remember, something of a purist.
Wanna know where I found my eventual winner?
I was upstairs looking for something else in the spare bedroom and opened the linen closet. Staring back at me was a cream-colored chenille blanket from Wal-Mart with a pretty weave. Not waffle, but it was close enough.
"Mom? Do you have an sentimental attachment to this blanket?..."
Much practice and eleven grueling ruffles later, we had a winner. 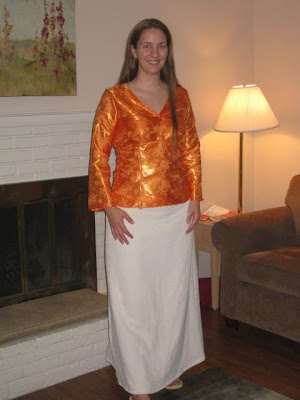 This is the best pic that I have of the full costume, except I took it before I added the ruffles. 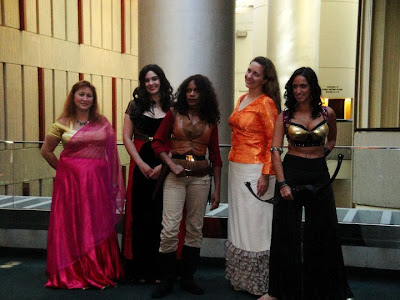 And finally, you can see the infamous ruffles themselves here. This picture was taken at last year's Dragon Con (which I also attended for the first time) during a photo shoot for Firefly costumes. This is me and the other Inaras (and one Zoe). If you're a fan of Firefly, you might be interested in the useless trivia that the most popular Firefly lady to costume is Kaylee, followed by River. I was surprised, because I'm a girly girl who likes super pretty things and Inara's costumes are all the most gorgeous. But that's my opinion, of course. They're also probably the most difficult to recreate.
Anyway, that's my costume history. For now. :-)
Posted by Faith King at 8:26 AM