T is for Tangled

There really wasn't any other choice for T.

How much do I love Tangled? That's hard to answer, really.  But we could start with one very special young lady. 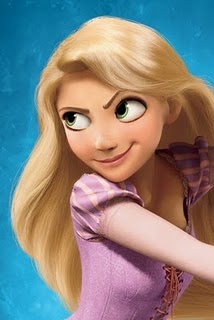 Rapunzel is my favorite Disney princess.  Or heroine, because, really, they've got a few pretty awesome gals who aren't princesses (Mulan, anyone?)  I thought it a pretty tall order that someone would bump Belle from that spot-- she's been there for almost twenty years, but there's something about Rapunzel that I just can't get enough of.
It begins with the hair.  I am from a very conservative Christian tradition, one which goes so far as to interpret New Testament instruction about female modesty as having long hair and wearing long skirts and dresses. So for obvious reasons, Rapunzel was a fairy tale that always interested me in particular.  When I found out Disney was going to be making Rapunzel, I was very excited, and that was before the preliminary artwork was released.
Flash forward through the conceptual art, the kerfluffle surrounding the film's renaming, the trailers, and one very particular voice casting that vaulted my interest in this movie from 'excited' to 'bouncing around the clouds' (more on that later-- it's particularly well-suited to a "Z" post).  I'm sitting in a movie theater, November 2010, the weekend of Thanksgiving, opening night.  I had already memorized the soundtrack.  The prologue began to roll and the grin on my face never faded.
I think it was my sister who put it best.  "It felt like it did when we were little."
Warning: Various spoilers ahead.
Tangled is infallible proof that you can use a well-worn formula and still have something special and something fresh.  The colors are beautiful, the story is solid, the music is breathtaking, the comedy is spot-on, and the romance is as charming as every Disney fairy tale love story should be. (Have to throw that qualifier in there because quite a number of fairy tales are in fact the opposite of charming).
But I digress.  Rapunzel is my favorite.  She's naive yes, but smart, resourceful, positive, talented, and effervescent.  I love that she can chart stars on her own.  I love that she has long hair.  I love that she respects her mother.  Yes, her mother was a very bad person, but with nothing much to go on, Rapunzel loved her and wanted to be a good daughter, which is not a characteristic we see very much in teenagers these days in popular media.
And when she finally realized her abuse, she did two more awesome things.  First, she fought back by refusing to cower.  Second, she offered to sacrifice her freedom for the sake of someone she loved.
Indeed, a princess worth waiting for.
I know that Disney has its share of bad rap.  Among many other things, I've known of people who consider the "Princess" push a restriction of young girls ideas about how 'girls' should be.  I can admit, the marketing campaigns can be a bit nauseating at times.  But behind the ribbons and embroidery and SO MUCH PURPLE, Rapunzel is a female role model I would be more than happy to have my own daughter emulate someday.  The same with Mulan, or Tiana, or Belle, or others.  Let's move past the pretty gowns and the convenient prince charmings and focus on what's to love about these young ladies all by themselves.
(I'm not actually that into purple.  But I want to make this costume because I will never stop loving to play pretend, and just for one day every now and again, I want to mingle with my fellow nerds and be Rapunzel for a little while) :-)
And everyone should see Tangled.  Like, yesterday, if you haven't already!
Posted by Faith King at 11:07 PM