E is for Embroidery and for Elsa

The thing that could truly make or break this costume is the embroidery on the skirt. Observe below: 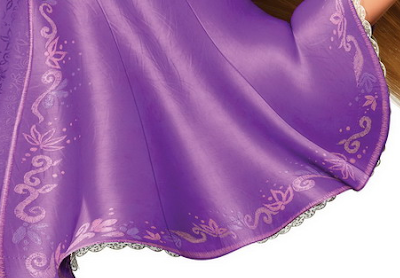 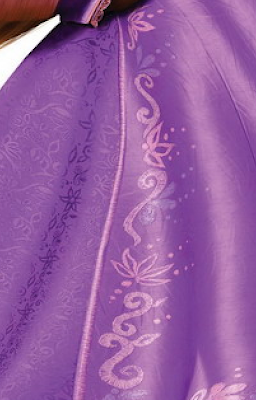 I pondered for a while the best way to go about doing this part. I came up with four options: fabric paint, screen printing, sewn-on appliques, and actual embroidery. The Disneyland version of Rapunzel's costume has appliques. They're okay, and probably a safer choice for the amount of wear that Disney's official Rapunzel actress will be putting into it, but I actually think they look too busy. And I quickly dismissed the fabric paint/screen printing options because, well, I just really want to be purist on this point.
Yes, ladies and gentlemen, my costume will have real embroidery. And I'll probably be doing it by hand.
I can hear the chorus of voices now: "But you could program a machine to do it!" Yes... I know. And there's a slim chance I yet may-- I have a friend who has an embroidery machine with customized pattern software, but for a number of reasons I don't think I'll go that route.
(1) She's never tried it out, so it would be a learning experience and I don't have any extra satin if it fails.
(2) Anybody else I would have to pay.
(3) This is weird, I know, but... I like hand-stitching. I find it soothing.
A couple of months ago, before I'd even started playing with patterns, I got out a scrap of my purple satin and some embroidery thread, and attempted to stitch a petal from one of the flowers in the design. I was very pleased with how it turned out. And it only took about twenty minutes. 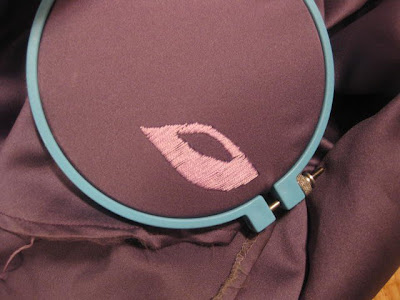 Something else has come up in my life that will make the prospect of so much hand embroidery not quite as insane a prospect as you might be thinking. Two nights ago I auditioned for a local community theater production of "The Sound of Music" which my brother is directing. This morning I found out I got the part I wanted: Baroness Elsa Schraeder.
If you've never done theater before, I will tell you that there is a lot of down time, especially if you're not a lead. Down time in which you need to be hanging around, attentive, and quiet. It is okay (though not ideal) for doing homework or trying to write or read, but it's even better for playing solitaire or doing something mindless and repetitive with your hands-- like embroidery.
I was going to scan and post the drawings of the main designs I had already worked out on graph paper, but I left my notebook and the designs at my aunt's house last time I was there and she confessed she might have thrown them away thinking they were her daughter's scribbles. Whoops. In either case, I need to get them all finished and scaled as soon as possible. I think that will be my official costuming goal for this coming Saturday. I will report back with my success or failure.
Posted by Faith King at 5:50 PM