E is for Eowyn

I don't suppose there's any need to spend much time introducing Eowyn of Rohan to the well-versed of fantasy, nor even a large swath of those familiar with pop culture, thanks to the wonderful Lord of the Rings film trilogy. She is the Shieldmaiden of Rohan, the Princess of Ithilien, and slayer of the Witchking of Angmar. She is, in short, thoroughly awesome.

The film version of Eowyn offers many lovely costume choices to emulate. If I were ever to tackle Eowyn, the first one I would go for would be her "Sheildmaiden" outfit, shown below: 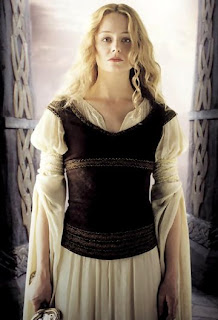 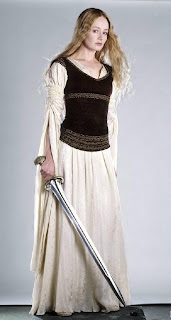 There are two reasons for this.

One, it has a certain clean simplicity that is very refreshing to me after the nightmare of detail that was Rapunzel. There's no train, and the vest is reminiscent of leather armor, which is soooo Eowyn.

Two (and I admit, this was most of the reason), there's basically already a verbatim pattern for it in easy existence. Click the link below:


Thank you, Simplicity (and your almost certain licensing agreement with the LotR movie copyright holding people?) for making it easy! You can also have a great start on her green gown (though lacking the front-open drape detail), and Arwen's "reading" gown (as I call it) from Return of the King.

And again, I would have an excuse to get a SWORD. This is a huge selling point with me.
Posted by Faith King at 8:00 AM