K is for Korra

Jun introduced us to the Avatar:The Last Airbender universe. Today we jump ahead to the shiny new sequel series, The Legend of Korra.

As it so happens, this amazing new show officially premieres on Nickelodeon this very Saturday!

Jun was not the Avatar. But Korra is. And she knows it. Just look at her: 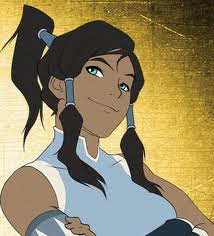 And look at this beautiful production art thingy which shows off her costume from all sides! So handy! 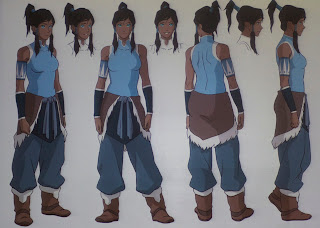 The shirt and pants of this costume are pretty basic. In fact, for the pants I would just go out and find a nice pair of blue sweatpants (If it were me-- I know for some that sort of talk is sacrilege!) The shirt is a little trickier. Mostly because I can't find any Mandarin collar pattern (retired or otherwise) that is seamlessly attached to the shirt proper like that. From the way Korra wears and moves in it, I might try making the shirt out of a knit fabric, just for the fun of it. You might even be able to pull it over your head that way!

What I really can't figure out is what's tied around her waist. Presumably it's her jacket, but where are the sleeves? Where's the bulk? If it's not a jacket then what is its purpose?!!?!?!?

Still, easy enough to make, if you just want the look of it. Brown drapey thingy trimmed in fake fur and a cord in the front. Easy peasy!


(I mean, does this look like it actually be tied around her waist and lie like that? I don't think so but what do I know?) 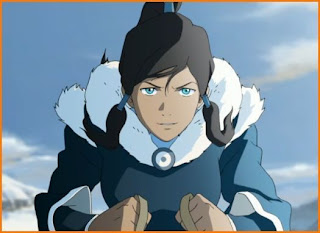 Oh the weird things that only costumers worry about. Perhaps future episodes will shed some light on the subject of Korra's weird outfit.

In the meantime, everyone should start watching it! It's different enough from the first series that you don't need to have watched that one first, though I would highly recommend it, as I've already gushed.