T is for Tonks

Funny thing about Harry Potter. I like the films, but "visually" the books and movies are different for me, probably because more people are described as wearing robes in the books than they do in the movies. Is that just me? Not that I'm raising a protest. Robes are... well, less cool than what Nymphadora Tonks is wearing in the following two photos: 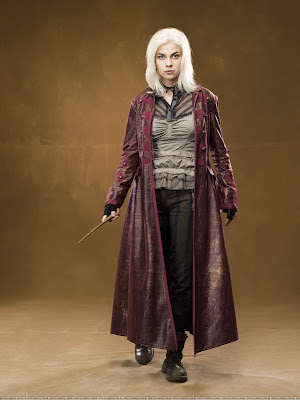 I guess technically the pink thing could be a robe, but I'd call it a coat, myself. 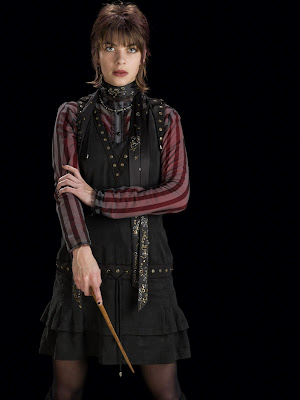 In any case, as crazy and challenging as those two costumes might be, I wanted to use this space to talk about book interpretation versus movie interpretation. Most of the costumers I know and admire try to emulate something a professional film costumer has come up with, and that's cool. But you don't have to go with the above visions to be Tonks. In fact, I think she would be quite easy to pull off in a few simple, cost-effective steps:

All of these things combined will help you really stand out as Tonks, I think. JK Rowling gave us so many scrumptious little tidbits about her capabilities and personality.
Posted by Faith King at 8:00 AM