I is for Inara

Inara Serra from Firefly was my very first character to costume. However, given the nature of her character, she has a whole closet of beautiful costumes to choose from! I have decided to talk about another Inara costume for today's entry.

I call this "The Teal Dress" or "The Tabard Dress"

As far as I can tell, the scene below is the only one she wears it in, though admittedly I have not done a complete, exhaustive rewatch of all fourteen episodes of Firefly just to be sure. Nor can I find any production or promotional shots of it, which is why it's very difficult to see what it looks like here.

All of that rarity notwithstanding, in the audio commentary for this episode ("Shindig"), the actress Morena Baccarin tells the costume designer that it was her favorite. (For the record, every episode of every period/costume-heavy TV show or movie should have optional commentary with the costume designer. I'M JUST SAYIN'). 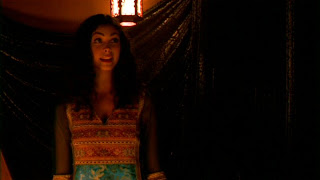 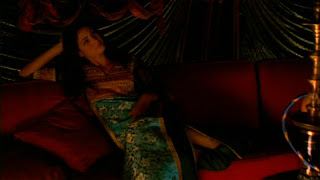 Now that I've worn my previous Inara costume to three different conventions, (and discussed the point with other costume nerds) I've noticed something interesting about Inara. While Inara's costumes are lovely and an important component of her character, none of them really stand out to the fans. Not compared to Kaylee's rainbow parasol or Mal's suspenders or Wash's Hawaiian print shirts or Jayne's crazy orange knit hat.  There were very few people who specifically recognized my costume. A few guessed that I was supposed to be Inara, based on the style, but they didn't remember the outfit. How interesting! Her wardrobe is so uniform in its splendor that it has become anonymous.

(Okay, maybe that's not really so terribly interesting to people, but for it being my first major sewing costuming debut, I had been hoping for more attention. Whoops. LOL)

You can get a better look at the tabard dress if you watch closely on the DvD. Enough to know that the sides of the dress are a jewel tone of green (not black, as they appear above), with a golden strip down the middle, and also that the sides don't come up quite as high as I would make them.

The "straight down" tabard style of dress (the tabard originates in medieval men's fashion but has trickled down into many things, including this dress and also aprons, is, fortunately, an easy sort of thing to adapt a pattern for. I mean, look at it. It's all long, straight seams! A sewer's dream!

For the fabrics and trims I'd just go nuts in the sari fabrics! I mean, who doesn't want to, in their heart of hearts, really?