H is for Handmaiden

Today's post is the only post of the entire series that features a general job title ("Handmaiden") instead of a specific character.  Although the word handmaiden is quite general indeed, I do mean it in a rather specific context, one which is extremely near and dear to my heart:

Where can I possibly begin? Handmaidenology is an obscure but gratifying niche of the Star Wars fandom and universe. It's one of the reasons that The Phantom Menace is my third favorite Star Wars movie, a ranking undoubtedly higher on the scale than most people's lists, I know.

In Episode I, Queen Amidala has five handmaidens named Sabé, Rabé, Eirtaé, Saché and Yané. The first, Sabé, famously serves as the queen's body double when the queen chooses to go undercover as "handmaiden" Padmé. Any member of the Royal Handmaiden Society (or RHS) can tell you which scenes in the movie feature actual Amidala (Natalie Portman) and which are Sabé posing as the queen.

(There are also noteworthy handmaidens in Episode II, and even more in the background for Episode III, but this post is going to be very long, so I'll just focus on Episode I).

These young ladies fascinated me from my very first viewing, and even more as I eagerly scarfed up any bit of outlying canon information available about them. They served a broad range of functions on behalf of the queen: bodyguards, confidants, hairdressers, etiquette experts, and bravely followed their queen into battle when it came time to fight for their planet. And all with the most breathtaking style!!!

Because of handmaidens, I made my very first total stranger cyber friend (we both wrote handmaiden fanfic). We are still friends to this day. We've met in real life several times. I am going to her wedding some time in the next year.

*cough* Excuse me while I wipe away a tear of nostalgia...

So yes, handmaiden fanfic, which was a great developmental milestone for my writing. I also chose "Saché" as my internet handle, which has served me well for almost ten years (Sache8).


I owe a lot to handmaidens!!!

But since we're here to talk about costumes, let's get back on track.

Undoubtedly the most iconic handmaiden costume is the "flame gown" which Padmé herself wore as part of her incognito stint.


(I'm pretty sure the handmaiden in this photo is Rabé. Any of my fellow RHSers reading this post who know or suspect otherwise, feel free to correct me. It's been a while). 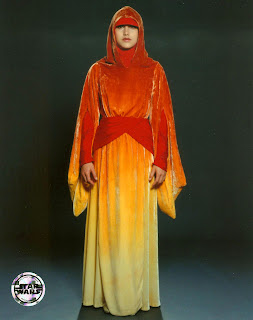 
One of my personal favorites is the "green" gown which the handmaidens wear for the final celebration of Naboo's victory over the Trade Federation. On this costume, it's easy to see Amidala's royal symbol stamped into the velvet, front and center. The Naboo Royal Symbol features into many of the handmaiden costumes, though not always as obviously. 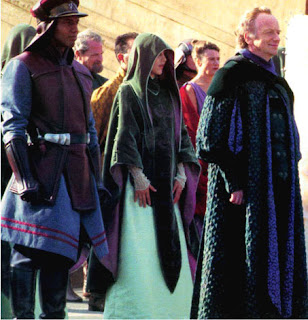 Another fan favorite photo from this part of the movie is the one show below, which is one of the few clear shots of the any of the girls' faces in the film, letting us know that this handmaiden is Sabé, the decoy queen herself.

Also, if anybody didn't know, she's played by 12-year-old Kiera Knightley of Pirates of the Carribbean and Pride and Prejudice fame. Every once in a while I still meet people (even Star Wars fans) who are like "Whoa, did you know Kiera Knightley was in Star Wars?" and I smugly reply "Why, yes. Yes I did." 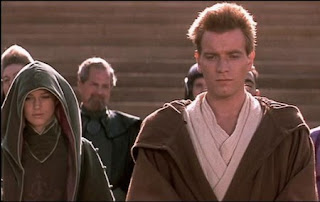 (This picture also captures a very popular fan "ship" pairing of Sabé and Obi-Wan, which is sentimental to me for even more reasons).

Of all the handmaiden costumes available to choose, I have decided to tackle the "Battle Queen" outfit that Sabé wears for the Battle of Naboo. This is one of the moments in the film when Sabé is fulfilling her role as decoy, so the costume is actually designed for the queen.

I thought I'd start with something "easy" for my first foray into handmaiden costuming, even if it's just a speculative foray. I figured the toughest part of this costume would be the headdress. The rest of the dress is just black and red, right?


Nope, my friend Rachel told me to look again. The black fabric is actually ribbed in what appears to be alternating sheer fabric and some sort of high pile, like velvet or corduroy. The red of the dress underneath shows through a little. Furthermore, the stripe effect of the ribbing is staggered on the vest/dress part (but not on the sleeve ends). According to Rachel, who has exhaustive experience with many Star Wars costumes, this fabric is not to be found.


So I started pondering the problem and thought of something you could do if you had ten times the patience God gave Job.

If you REALLY, REALLY want to be accurate, this is my idea.


Step 1, find some black striped ribbed velvet like the kind pictured here and cut it into strips.

Step 2, evenly stitch the strips onto sheer black fabric, taking care to make everything straight, and also equally distanced for the staggering part. Stay close to the edges of the strips to help avoid fraying and go slowly.

Step 3, cut and assemble you're newly created fabric as necessary. I would take great care to make sure every step of the pattern was 100% rock solid before doing this.

Is this just crazy thinking? I don't think I'd dare try it right now, mostly because Darth Stitch is an economical little sewing machine, prone to shaking and shuddering and he ought not to be relied upon when straight lines really count for something.

Here is an excellent write-up analysis of this costume, albeit for a doll, but provides a lot of essential information. For the wrap and shoulder strap aspects of the pattern, I'd probably start with the Simplicity 5840 I already talked about in the Deokman entry and work from there. The skirt part of the vest would be trial and error.

The belt and headdress would be whole new realms of costuming, which I would not dare to tackle until that glorious day the dress was ready.

And there we have it. Handmaidens and the beautiful handiwork of Star Wars prequel costume designer Trisha Beggar, whom we all chase but never can quite catch!