N is for Nimueh

The "N" and "O" posts, back-to-back, feature a pair of truly stylish villainesses (which is, apparently, not a real word). I find this hilarious, since, well, together they spell "NO"

Just say NO to evil, kids.

But by all means, say yes to evil's dress sense. 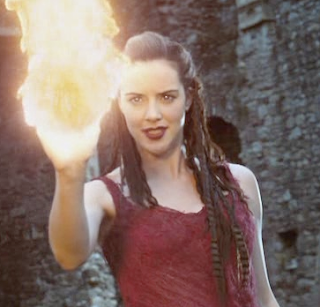 In BBC's Merlin, which we introduced in our Gwen post, Nimueh is a first season nemesis to Merlin, and they most certainly do not fall in love. She is played by the superbly beautiful and talented Michelle Ryan, whom I would love to see more of in general. This Nimueh is one of my favorite characters because, as an antagonist, she has many layers, and substantial motivations for her evil. Truly, sometimes her attitudes are downright sympathetic, though Merlin does take her down in the end.  Too bad-- she could have taught her successors in the evil sorceress dept a few things about nuance in villainy.

Her skirt must have taken lessons from her personality, because it too has many shifting layers: 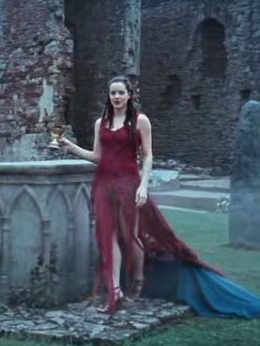 Oh, man, I love this dress so much. 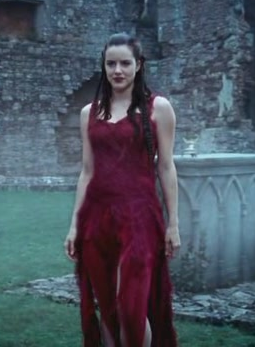 Though she looks very cold, doesn't she? 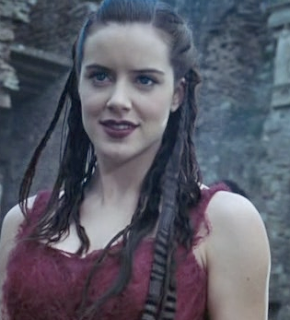 Here's a good close-up to get a better idea of the texture on the bodice.

Okay, so down to business. For starters, I'd construct the dress with two different kinds of fabric. An underdress in something with a good, flattering drape (like rayon). For the overlay, experiment with organza or tulle. I probably wouldn't kill myself getting the perfect "tattered" look like hers, though if anyone has any ideas, by all means, elaborate in the comments.

To me, the mulberry color is crucial in recreating this costume. I would go the extra mile and dye it if I needed to to get it right. I'd probably mix in some purple in the overlay as well.

And of course we need a pattern. For once I found something that will serve nicely: Simplicity 3632
It has variations for the sweetheart neckline and sheer fabric overlay. After sewing the longer length, it would be a simple matter indeed to hack the skirt in pieces to the knee or mid-thigh and use liberal amounts of fraystop to finish them off.

Let's not kid ourselves. Her hair is just as awesome, if not more, than her dress. I mean, come on: 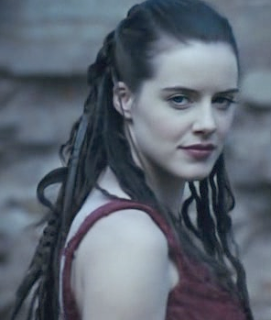 Oh yeah. Doesn't she know it? 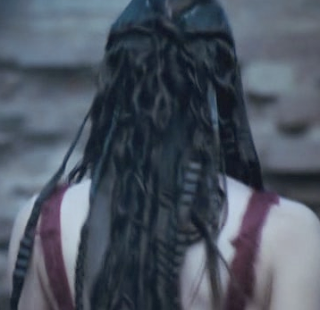 A good view from the back. 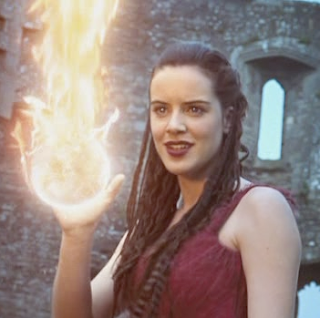 Clearly she has a magic hair gel spell in her bag of sorcery tricks.
The best part? It would take me about two hours, but I could totally manage that.


I think I might have talked myself into trying this costume next year, just from doing this write-up. I'd like to thank Becky at sew and sew for her invaluable input.