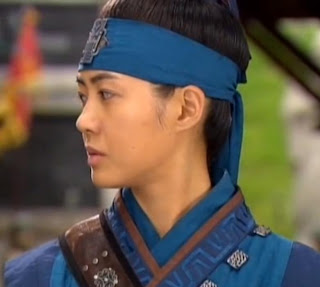 Many of my readers will probably be generally familiar with Briar Rose, Lord of the Rings, or even Once Upon a Time, new as it is. However, our next character is probably a little more obscure to the wider western audience. Ergo, I am going to spend a lot of time on this post, first introducing her and then speculating costume possibilities.

I have established in one previous entry on this blog how I have a niche passion for Korean television dramas. I think this enthusiasm can be attributed to a combination of reasons.  I'm fascinated by new cultures (and a whole slew of new stories to go with them!).  Even from a perfunctory acquaintance, I've come to recognize that Asian dramas in general are not structured around a speculative, multi-season framework. To put it another way, each story is designed at the outset to run X number of episodes and then that's it, it's done. Whole story with a beginning, middle and end. They're less episodic in that sense, and for a lover of stories, this is extremely satisfying. Additionally, I find that the content (gratuitous sex, violence, etc) is tamer than US television of late, and that's very refreshing for someone with my tastes as well. Roll all of these things into one, and you spit out my Korean TV fetish.

Of all the dramas I have watched, none was as vast, compelling, nor lush with visual imagery as The Great Queen SeonDeok. It was the first historical drama that I sampled, and boy did I ever pick a good one. At 62 episodes (60-70 minutes apiece without commercials) its ambitiously long for a typical Korean drama, roughly equivalent to about four full American "seasons" of a 40-minute show.  The story follows a highly fictionalized version of the life of Queen SeonDeok of Silla, one of three medieval-era kingdoms that existed prior to the modern, unified Korea. The drama takes a great deal of historical license, most notably the premise that as a child, the Queen was smuggled away and raised unaware of her heritage (This did not happen in history, but it does make for gripping TV!) Historically, Queen SeonDeok is certainly a fascinating enough character in her own right. She was one of the first sovereign female rulers in Asian history, and accomplished a number of notable advances for her people.

One very simple thing remains true between actual history and the fanciful version presented in the show: SeonDeok was the queen's royal name, but her birth name was Deokman (Doke-MAHN).

The drama follows the entire life story of fictionally stylized Deokman, from the scandal and secrecy of her birth, her journey to discover her identity, her rivalry with a courtesan named Misil* for the rights to her throne, her ultimate ascension to the throne and some glimpse into her struggles and accomplishments as ruling queen before her death at a young age (about 41 years old). Deokman is an amazing character. Smart, passionate, loyal, just, and unflinching.

*Misil is also a historical figure and an amazingly compelling character in this series, almost the true 'main character' at times, but I don't want to diverge too far off course gushing about her. Just watch the show!

Given the scope and span of Deokman's life, there are many iterations of her on the show, beginning with her childhood (pictures not included here) and moving on to her life in the court as an adult.

In the course of the story, Deokman disguises herself as a boy and comes to serve as a Hwarang warrior, which were a royal order of soldier, usually sponsored by nobleman, but occasionally commoners could serve as well. 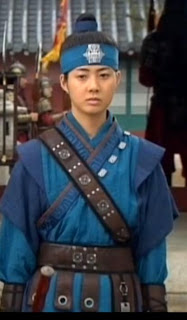 After our heroine learns the truth of her identity (and, more importantly, decides to embrace it, which is a very huge crossroads for her), her place in court naturally takes a shift. For one thing, she gets to start dressing as a girl again.

One thing I enjoyed just from observing the show was how they portrayed the differences in rank and age by dress and hairstyle. Wearing the hair (or hairpiece) in an "up" do seems to have been a privilege reserved for the most highly-ranked women. The loose hair as shown below indicates younger, "Princess" Doekman 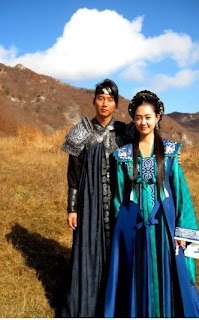 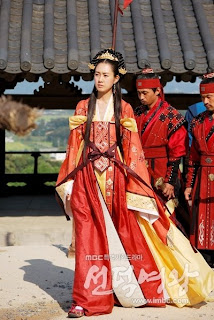 QUEEN SEONDEOK
And finally, we have the breathtaking, regal ruling Queen. 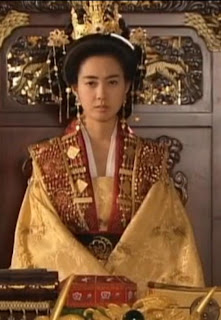 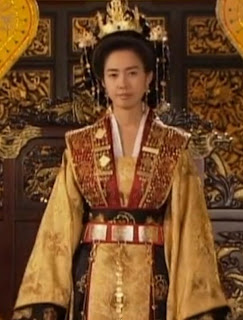 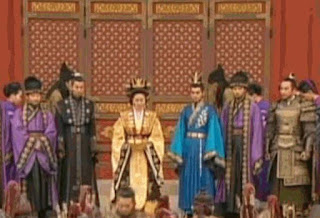 I am NOT doing that costume. Haha.

If I were to tackle Doekman (and I may toy with the idea in the future, though it's not in my immediate plans), I would choose her Hwarang uniform. Why? First off, it's comparatively simpler than any of her royal garb, though still a tall order in the details dept. Two, it's different from the "beautiful gown" route that I usually go, so it would add some variety. Three? IT COMES WITH A SWORD.

(Reposting the picture from above so my dear readers do not have to scroll).

Where would I begin for a pattern? Why, with the Jedi of course!

It's evident that the Star Wars Jedi order (and costumes) have a lot of Asian martial arts influence in their concept and design. This pattern gets the basic "wrap" of the tunic down pat. There are obvious necessary alterations, but nothing that isn't doable with a little experience, common sense, and or guess work.


In this picture you get a good view of the back and full-body views of the costume courtesy of both Deokman (kneeling) and her unit commander Kim Yusin (standing). His version is slightly more elaborate since he's the captain, but you get the idea. After the central tunic and pants were constructed, the remaining costume pieces would be a series of lessons and choices. I would probably go with faux leather or suedecloth for the belt and shoulder strap, maybe even the gauntlets. The metal emblem on the headband (which, along with the colors, identifies Deokman's specific Hwarang unit), is something I might go the extra mile to get "just right" which probably means just flat out finding and paying someone to make it for me.

And that is it! For the moment, all 62 episodes of The Great Queen SeonDeok are available on Hulu (in Korean, with English subtitles), if anyone is interested. I can never say enough by way of recommendation.
Posted by Faith King at 8:00 AM