L is for Leia

Just because I can, I'm going to start this post off with a little ditty I wrote last Christmas.


Star Trek and Star Wars and X-Files and Buffy!
Scoundrelish space pirates that are so scruffy!
Fourteen straight hours of Lord of the Rings!
These are a few of my favorite things!

Twelve graphic t-shirts with Doctor Who's faces!
One Steampunk costume with corset and laces!
Three trips to Comic-Con ending in flings!
These are a few of my favorite things!

Old NES games and new Harry Potter!
The general awesome of Darth Vader's daughter!
The moment I found out that Zac Levi sings!
These are a few of my favorite things!

When they cancel my TV show I get really mad!
But then I remember my favorite things, and then...

But let's talk specifically about that 'general awesome of Darth Vader's daughter' part, shall we?

Again, I don't think I really need to do much in the way of introducing Princess Leia of Alderaan. Nor can it be contested that these babies constitute her most famous hairstyle: 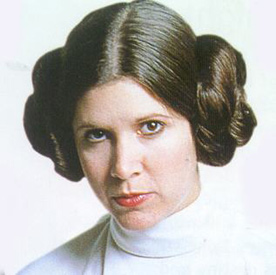 My personal favorite, however, was always this one: 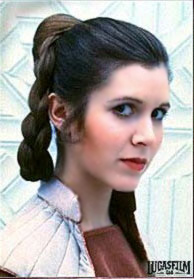 As such, if ever I decided to do a Princess Leia costume, I would go with the Bespin outfit from The Empire Strikes Back. 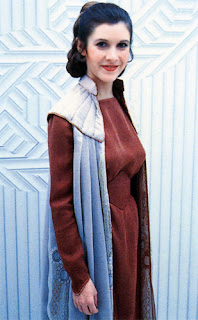 I know, I know. More embroidery.

I'm not going to do any exhaustive research or thought processes of how to make this, mostly because there are quite a number of existing sources already out there. Just Google "Princess Leia Bespin Costumes" and I see three links to write-ups people have already done on the subject on the first page alone. It's brown. It's grey. It's quilted in places. The biggest decision, in my opinion, is how accurate and exhaustive you want to be on the jacket detail, and then what method you'd like to use to capture it. In this case, I would probably go with fabric paint.

Which means I'd need to figure out how to use it first.


But look, I can already sort of do the hair! 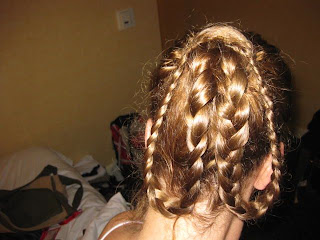 In lieu of actual pattern or fabric suggestions, I present a highly entertaining link to one of my favorite blog entries of all time: Mythbusting Princess Leia's Hair which says (with more eloquence and detail) everything I always wanted to express after people said "You have long hair! You can do Princess Leia buns!"

No, I really can't. Not screen-accurate ones, anyway. LOL