X is for Xari

This is an extra-special post for me, because I can truly speak as an authority on our "X" character. Xari Oth'ilin is one of the main characters of the fantasy series that Laura Josephsen and I are writing together!

Xari is an orphan, and grew up shunned from a young age for her mixed heritage. She has a new family now, however-- an adopted father who taught her swordplay and a fairy guardian who awakened her to be a Speaker-- someone who can talk to four special species of animal. Of the twelve, Xari most especially represents the otter.

As a child, Xari was bitter and rebellious, but the friendship and counsel of Burin, her father, and Asheford, her guardian have smoothed her rough edges over the years. She is compassionate and dedicated, a talented fighter and a faithful friend.

The picture below is a portrait of Xari that we commissioned for the Book One's release back in 2010. I love it so much! The artist is Jacob Grant. 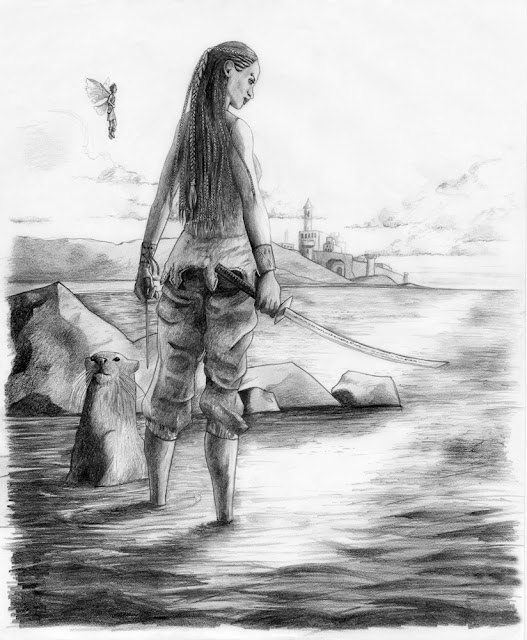 Here is an excerpt from Book 1 of our series, which describes Xari's appearance:

Despite being at least a hand shorter than anyone else around, Xari knew that people were often wary of her appearance.  Her hair, which she had grown down past her waist, was kept in dozens of braids, and her right eyebrow was pierced, both in the style of the Westerlons.  She had learned much of the Westerlons in the past years, and was no longer afraid to look like one.  She didn't wear dresses as a proper young lady should--she found breeches much more practical for the work she had to do.  Here in Ithrin, strangers weren't scared of her, but they were oftentimes cautious.  They had only dealt with the occasional Westerlon warrior, and didn't have the fear that the people of Threnphol and Réol did.

So you can see, Jacob's interpretation of Xari is pretty in keeping with the book. The braids are highly important, at least if you want to do "Book 1" Xari. Also important are the swords! She fights with two. (For an eyebrow piercing, I would just do something fake-tattoo style. I am not that dedicated to accurate costumes!!)

If anyone is interested in learning more about our series, there are some helpful links to the side of my blog. Also, below is our book trailer, featuring the full extent of the artwork we commissioned from Jacob.


Jacob Grant's website (please do not redistribute any of his work, including anything from the Restoration series).
Posted by Faith King at 8:00 AM