A is for Abigail

I have been watching "Once Upon A Time" faithfully every week since it began airing. At first I found it a little bit shaky, but the third episode was as enchanting as I hoped the show could be, and the seventh episode sucked me in for good. After that, it just kept getting stronger.

In the show's "fairy tale" world, Princess Abigail is the daughter of mythology's King Midas, and a rival to Snow White. When we first meet her she seems quite shallow and selfish, but there's much more to her than meets the eye. For those of you who might not yet be watching the show, I won't spoil much more beyond that!

Abigail's focus episode is No.13 "What Happened to Frederick". Naturally there are quite a number of interesting available costumes to emulate from "Once Upon a Time" but, for me, Abigail's riding gown from this episode is the most stunning costume they've put on the screen so far (which is fair to her, because her first costume was probably the most hideous thing they've put on the screen, save some of the Wicked Queen's costumes). 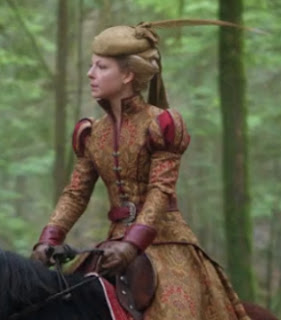 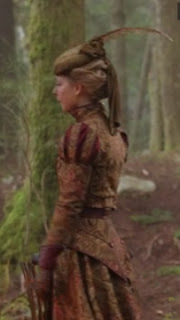 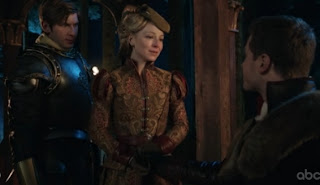 I can't even begin to imagine what a challenge it would be for me to recreate this costume. Both fabric and construction are incredibly complicated, and if I couldn't find a fabric close enough to satisfy me, I wouldn't even bother. The dress itself would require a lot of custom tailoring.

I couldn't find a good, clear shot to demonstrate it, but the front of the dress splits all the way up to the waist to allow Abigail to ride comfortably. Underneath, she appears to be wearing red leather leggings the same color as her belt and cuffs! Between the collar, the fastenings, the piping, and the "tail" of the jacket, I would probably have to make at least three test jackets just to get it right. Then there's the hat. Oy ve!

Still, in our imaginary world, let's say I wanted to go for it.  Based upon cursory research, it seems to me that the collar and tailoring of this gown make it mostly Elizabethan in style and time period.

The price of this pattern is a bit daunting, but given how close it is right off the bat with the collar options, the center opening, and the split skirt, it would be worth it to me. After Rapunzel, the sleeves are something I think I could figure out on my own.

For the fabric I'd start in the home decor fabric section of JoAnn's. This was a friend's suggestion, and a very good call. Just out of curiosity, I walked up and down the aisles in this department the last time I was there and found a surprising number of things that might actually be acceptable, depending on one's level of obsession with screen accuracy. I'm fairy certain by looking at it that Home Decor is where the costume designer picked his/her fabric.

The piping I most certainly would not do in leather, but a plain cotton of the same dark red. The belt, gloves, and leggings... tough call.

It's a beautiful daydream, for sure!