I enjoyed the movie TRON: Legacy (though I had to do a bit of quick "catch-up" since the entire Tron franchise was new to me as of that year). I especially enjoyed the character of Qorra, a computer program in the digital world who is more than what she seems. She has a combination of competence and innocence that makes her very endearing.

Like all folks in the TRON world, she also has a pretty interesting costume, one of TRON's famous "light suits" 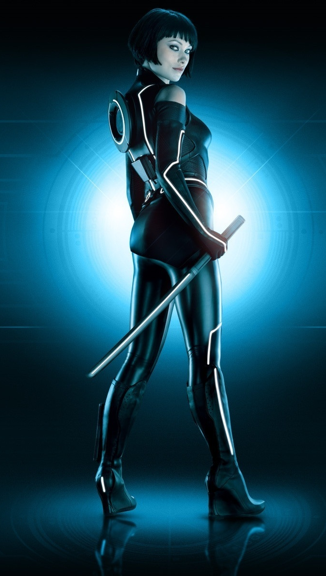 First off, like many costumes I think about, I wouldn't wear it "as is" because of my personal dress standards. It's much too skin tight and though I don't think I've mentioned it in this series so far, I only wear skirts and dresses out and about. So some costumes are flat out.

However, if I really, really wanted to do Qorra, I know what I would do to pull it off. Have a closer look at the photo below. Note the bottom hem of her tunic, how it slopes down asymmetrically. If I were adapting the costume I would simply turn this into a knee-length skirt. And also make the entire thing a wee bit less form-fitting. Problem solved! 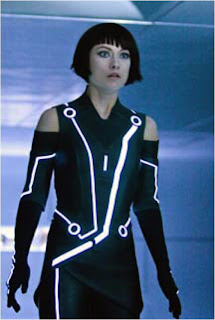 The real reason the idea of a TRON costume is so much fun is because of the white stripes. By using reflective fabric or safety tape for the white stripes (such as construction workers, or police officers sometimes wear) you can make it so the costume actually "glows" in certain lights. And then go find a party with a black light. LOL

Don't forget your disk, either (exhibit C below). 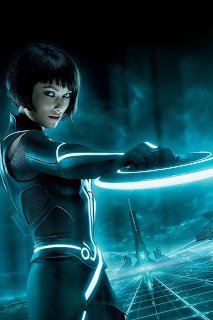 Fabric: Well, I'm not wearing actual leather. Pleather, I suppose? I've not delved exhaustively into this fabric class. The aforementioned reflective tape, of course. Black leather knee-high wedge heel boots are easy enough to find too, though finding something cost-friendly might be a little trickier. Gloves. A short black wig to round things off.

.... this costume would get expensive really fast.