J is for Jun

So this will be an interesting entry. There are myriad things to be said.

First off: The character and fandom. Anyone who may have heard of Avatar: The Last Airbender and dismissed it as a kids' show, or anime, or some spinoff of James Cameron's Avatar (with the blue people), well, take a second look.

It is a kids show, but it's for grown-up kids too. One of the most satisfying, seamless pieces of storytelling in all of my experience, including books, movies, legends, what have you. It's wonderful. Give it a try.

Stylistically it has some very loose inspiration in anime, but it isn't anime. (For the record, I respect anime as an artistic genre, but I've never been able to enjoy it generally speaking).

It has nothing whatsoever to do with the Avatar with the blue people that was at the movies a couple of years ago.

(Also, don't pick up the film "The Last Airbender" directed by M. Night Shyamalan and think it might be a good intro to this world. They're supposed to be the same thing, but... no. Just no).

Ahem, anyway. This Avatar is a 3-season animated television program set in a fictional world where some people have the ability to "bend" one of four elements: water, earth, fire, and air. The Avatar is a special individual who can bend all four.

Jun, the subject of my "J" entry, is NOT the Avatar. She's not even a bender. She is a cool-as-a-cucumber, tough-attitude bounty hunter. She's only in 2 episodes. 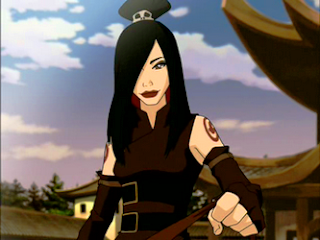 Well, let's state the obvious. I'm not really a "Jun" sort of person, most of the time. There's very little 'bad' girl in me, but Jun's level, slightly sarcastic confidence is certainly appealing. At the end of the day, though, I would never actually make this costume because I would really start to worry people in my life, and anyway my personality is so different from the outfit, that I would just spend a lot of time giggling and Jun probably wouldn't approve.

So why am I doing a write-up about it, then?

Let's put the nostalgia back on the front burner (it hadn't really gotten too cold since the "Handmaiden" episode).

It was a little less than three years ago when I made my plans to go to Comic Con. It was really happening. I was so excited, and if course I wanted to go in costume! Except I had never even learned how to thread a sewing machine. I was willing to learn, but in searching for a costume idea, I was eager to look for something simple. There were a couple of other factors too, the main one being that it be a modest enough outfit for my personal standards of dress.

Jun is on this list because she was a turning point costume idea for me. I looked carefully at her outfit and went... I can do that! (and also "I can wear that!").  At the time I even had the thought that full-on sewing might not even be necessary-- if I could just find a straight black dress and wrap some belts around it, I'd be over halfway there.

I was so excited, that I went started playing with my hair to see if I could make a top knot: 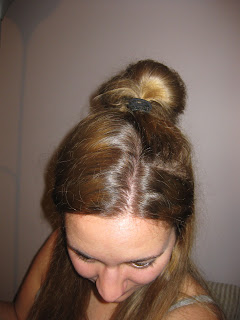 (It really wasn't too bad, considering I hadn't even tried teasing it or any other tricks to give it volume)

And that was it. In that moment, I had crossed the line between costuming in my head to costuming "in the flesh" (in the hair?).

Let's presume for the moment that I had proceeded with this process. You could go with my prior idea and find a straight black cotton dress and fix it up. It wouldn't be hard at all. Add two belts, some black pants and boots, those long fingerless gloves (cut up some black tights in a pinch), add some dark makeup and a fake snake tattoo and you're good to go! 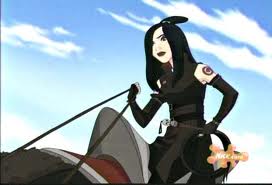 If you want to be a little more precise in your tailoring, I would suggest using patterns like the ones below.

It was surprisingly difficult to find a current pattern from any of the big pattern makers that featured a basic mandarin-style collar, asian-inspired cut. Apparently they are not in style now. There are plenty of retired patterns that will serve, though, across the board.  This one is my favorite: 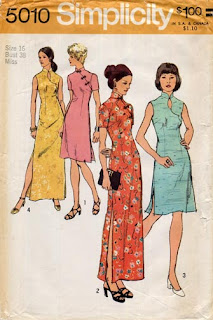 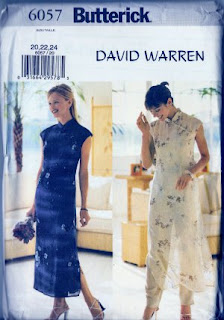 There are plenty of others, and with all the ebays and etsys in the world, it's surprisingly easy to Google the pattern number you're looking for and find somebody somewhere that wants to sell one.

I also found a tutorial here about how to construct your own mandarin collar.

I have two more ladies on my list from the "Avatar" universe. In fact, we'll be meeting another one tomorrow!