F is for Fowler, Amy Farrah

One of the easiest ways to "make" a fun costume is just to buy all the pieces as exactly as you can. This is sometimes referred to as "closet cosplay", or a costume made up of stuff that's already handy in your closet, which you bought for everyday wear, or could easily go get at your nearest Target.

Strictly speaking, I have one "closet cosplay" on my résumé already: the Nerd Herder costume from Chuck that I did for Comic Con (and beyond!) It was my very first costume, and I still enjoy wearing it. Strictly speaking, I bought the tie and lanyard special, but I didn't make them. I guess that's my point.

One of the great things about the characters on The Big Bang Theory is that they're contemporary characters who wear "ordinary" clothes, but they all have their own unique, iconic style. Sheldon is infamous for his rainbow-hued collection of graphic t-shirts, and Wolowitz's costumes are even more ridiculous.

Personally, I may just whip something up for Amy Farrah Fowler.

Amy is smart, nerdy (sometimes uncomfortably strange) but still awesome and endearing neuro-biologist. She's also Sheldon Cooper's girlfriend, which is rather staggering in its own right. 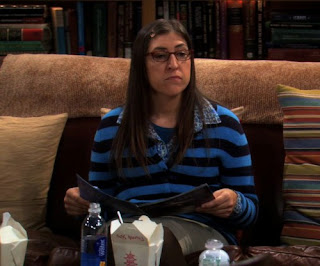 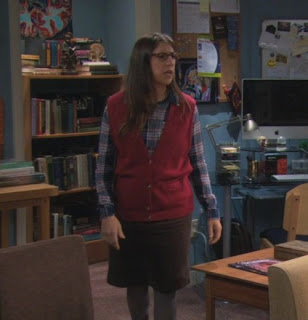 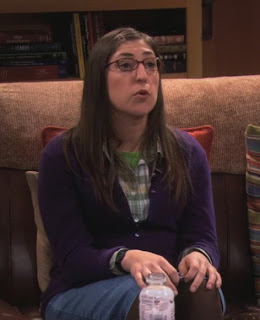 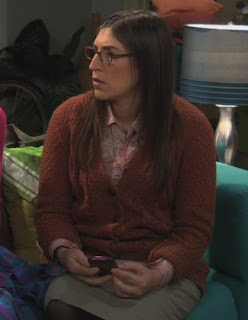 Exhibit D
(She also plays the Irish Harp!)
(But I'm not taking one to a convention!!) 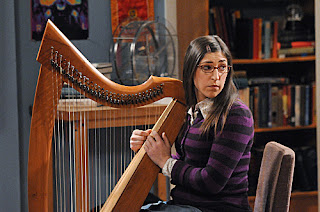 Exhibit F
(Tiara optional)
(But boy did it make her happy!) 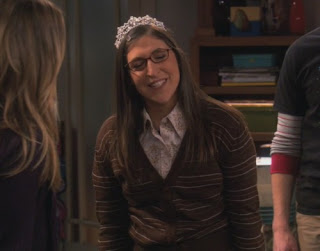 Looking to my closet, I'm probably already about halfway to a decent Amy ensemble. I have an excellent knee-length jean skirt, tights, and glasses. Plus, my hair is pretty close, if a trifle long. I'd just need to straighten it.  The key to the rest of it is a great "Amy" cardigan, preferably one with horizontal stripes. A quick google search of "striped cardigan" yields many acceptable choices, and I know I've seen stuff right off the rack in the stores, especially in the autumn.

So there you have it, folks. An easy but identifiable costume that you don't have to know how to sew in order to pull off!
Posted by Faith King at 8:00 AM